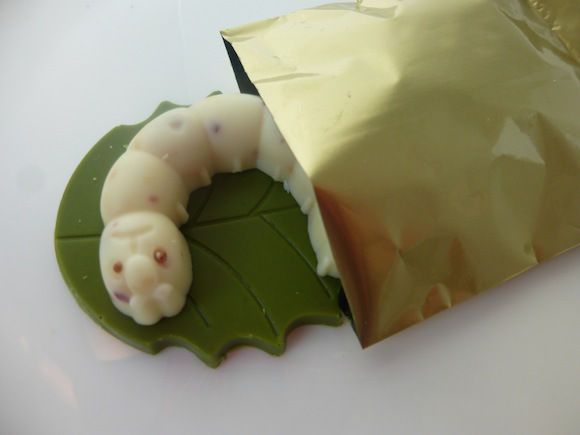 Laura McQuarrie — May 5, 2014 — Lifestyle
References: yurugido & en.rocketnews24
Share on Facebook Share on Twitter Share on LinkedIn Share on Pinterest
Japan recently announced that its oldest silk factory, the Tomioka Silk Mill is expected to be named one of UNESCO's World Heritage sites later in June. With this announcement, the factory is getting a ton of attention and so are its highly unusual chocolates, which take the shape of white silkworms.

The chocolates themselves don't seem to contain any insect ingredients, but they are shaped to look just like a silkworm sitting on a leaf. The green leaf that the worm-shaped chocolate sits on is actually made from powdered mulberry leaves, which is said to give the chocolate a green tea-like flavor. As well as this, the white chocolate contains a mixture of berries and rice puffs, which makes it more tasty than it looks. As an even bigger tourist destination, Tomioka Silk Mill's little worm chocolates will probably become even bigger best sellers.
5.1
Score
Popularity
Activity
Freshness
View Innovation Webinars