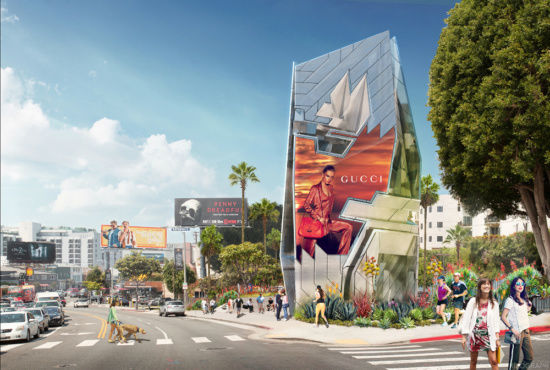 Joey Haar — October 23, 2016 — Art & Design
References: tomwiscombe & archinect
Share on Facebook Share on Twitter Share on LinkedIn Share on Pinterest
While the content on billboards is usually what makes people turn their heads, architect Tom Wiscombe's new design for the billboard itself will be sure to draw attention. Slated to go up in Los Angeles' West Hollywood Belltower, Tom Wiscombe's billboard concept is a crystalline structure that reimagines all the facets of what a billboard should be.

Even the most experimental billboard concepts today essentially boil down to using a digital screen rather than a static image. While Tom Wiscombe's design incorporates a digital screen, it goes far beyond just that. Firstly, the freestanding structure will have ad space on both sides. Those ads will stand vertically, rather than horizontally, with a slightly canted angle that will juxtapose the surrounding architecture. The billboard is meant as an interactive experience, with space in the middle of the structure that pedestrians can enter and explore.
6
Score
Popularity
Activity
Freshness
Jeremy Gutsche Keynote Speaker