50 Naughty Ads That Cross The Line 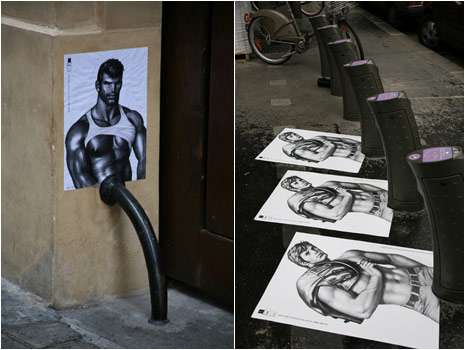 mediterranean — June 15, 2008 — Naughty
References: etatlibredorange & adrants
It's all about the product placement in this extremely funny and naughty Tom of Finland Perfume campaign.

Created by the twisted minds at Ogilvy ad agency in Paris, the campaign attached images of "manly men" to protruding public fixtures such as water pipes and bicycle racks.

The result of the creative placement are eye-popping, head scratching ads that cost next to nothing! Even the print ad follows the same formula by strategically placing the bottle's long cap in front of the stud on the bottle.

The perfume is made by Etat Libre d'Orange in honor of Tom of Finland, a gay comic and erotica artist whose black and white drawings are used in the ads.

The creator of the perfume, Antoine Lie, describes the fragrance as ,"A guy coming out of a shower. He's clean, but not fragranced. And he puts on leather pants."