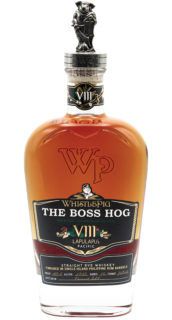 The newly launched whiskey continues WhistlePig's globetrotting theme by offering customers a unique expression inspired by a "voyage across the Pacific." The 'Boss Hog VIII' features straight rye whiskey that has been matured for close to 18 years in new American Oak barrels, followed by a double finish in toasted rum barrels from the Philippines.

"When we discovered LapuLapu’s story, we knew we had to track down the best Philippines Rum barrels we could," explained Meghan Ireland, Blender, WhistlePig Whiskey. The result of finishing the spirit in Phillipino rum barrels made for a unique flavor that combines cinnamon, butterscotch, and toffee, with notes of lemon and underripe bananas.
1.5
Score
Popularity
Activity
Freshness
Jeremy Gutsche Keynote Speaker