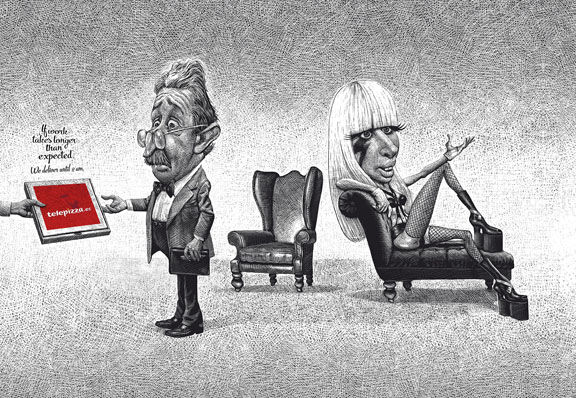 Meghan Young — April 10, 2014 — Marketing
References: tapsayr & adeevee
Share on Facebook Share on Twitter Share on LinkedIn Share on Pinterest
The Telepizza Pizza Delivery ad campaign is comprised of a series of hilarious illustrations that are good, if somewhat far-fetched, examples of the tag line, "If work takes longer than expected." From Lady Gaga talking the ear off of a shrink to Mike Tyson making endless confessions to a priest, some workdays simply never end, but the hunger that ensues can.

Conceived and executed by the Tapsa Y&R ad agency branch based in Madrid, Spain, the Telepizza Pizza Delivery ad campaign was art directed by Adrian Rios and Fernando Heredia with creative direction by Tute Ostiglia, Susana Albuquerque and Juan Cenoz. The comical sketches were illustrated by artist Ricardo Martinez in black and white save for the bright red of the pizza box to make it stand out.
2.8
Score
Popularity
Activity
Freshness
View Innovation Webinars