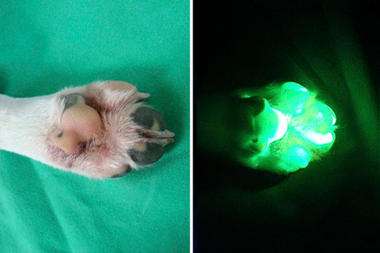 Almost $3.2 billion was spent to perfect the method used to render Tegon into a moving, barking light source with a fascinating and altogether shocking result. By adding precise drugs to the beagle's meal, SNU researchers can not only turn Tegon's glow on and off, but can also change her color too. So what are the commercial applications of this technology and who would really want their dog to glow?

The aim of this now successful project was not to replace traditional pets with glowing, alien-like replacements, but instead SNU scientists hoped to perfect gene splicing (a cutting-edge new medical technique.) Indeed, the development of Tegon may well have propelled life-saving technologies several years into the future...and she's cute too!
3.5
Score
Popularity
Activity
Freshness