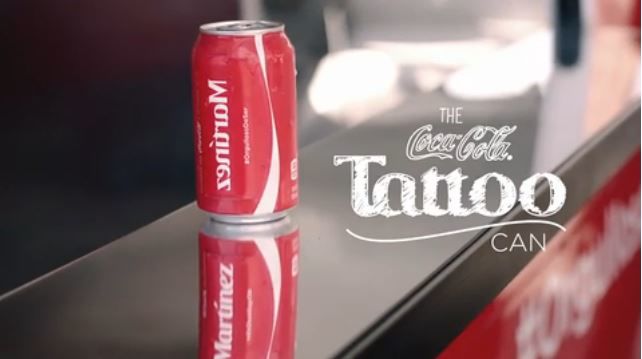 Joey Haar — January 10, 2017 — Marketing
References: adage
Share on Facebook Share on Twitter Share on LinkedIn Share on Pinterest
Coke's 'Tattoo Can' campaign dovetailed off of the success of the soft drink company's famous 'Share a Coke' platform, but the new campaign was shifted to better represent the interests of Hispanic consumers in honor of Hispanic Heritage Month. For Tattoo Can, coke created cans that had common Latino surnames printed on the sides in ink, allowing Hispanic consumers to get temporary tattoos of their names straight off of their beverages.

The cans were sold with stickers over the names. After peeling those stickers off, consumers could press the tattoos directly on to their skin thanks to the condensation on the cans.

Coke sold over 130,000 cans during the run of the Tattoo Can campaign. Much of that success can be attributed to the company's understanding of Latino culture. People of Hispanic descent have strong connections to their families, and thus take an immense amount of pride in their surnames.
6.7
Score
Popularity
Activity
Freshness
View Innovation Webinars