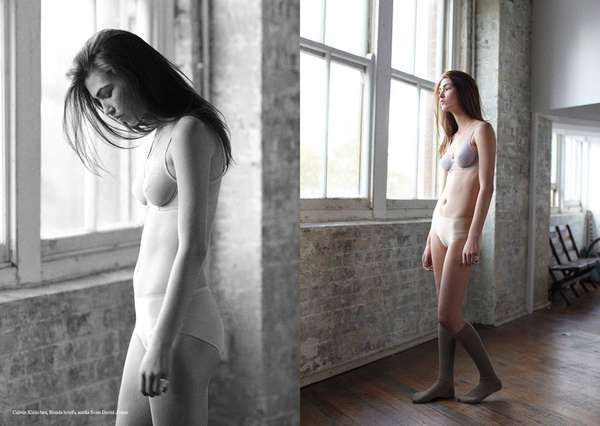 The Tallulah Morton LoveWant Magazine Spread is Natural and Sensual

The Tallulah Morton LoveWant Magazine August 2011 editorial was shot by Australian photographer Bec Parsons, who is quickly establishing herself as the preeminent candid portrait shooter in the land of Oz. A week ago, her editorial (also for LoveWant Magazine) featuring Myf Shepherd captured my attention, and it’s clear to me that the success of that shoot was no fluke.

The shoot features Tallulah Morton, the 19-year-old Aussie brunette sensation, in a series of plain bare knits, lingerie, and denim. She manages to exude an organic beauty that is rare in the pages of high fashion magazines. The hot shoot matches the molten lava that is Morton's career right now. She has been featured on the pages of Vogue, Marie Claire, the Daily Telegraph, and Harper’s Bazaar. She has walked in shows for fashion industry heavyweights like Diane von Furstenberg, Vivienne Westwood, and Dior.

But the Tallulah Morton LoveWant Magazine August 2011 editorial does not shine on the model’s talent alone. Bec Parsons manages to create an understated editorial where many fashion photographers wouldn’t. It shouldn’t be long before the rest of the world begins to pick up on her ample talent and unique vision.
6.9
Score
Popularity
Activity
Freshness
Get the 2021 Trend Report FREE