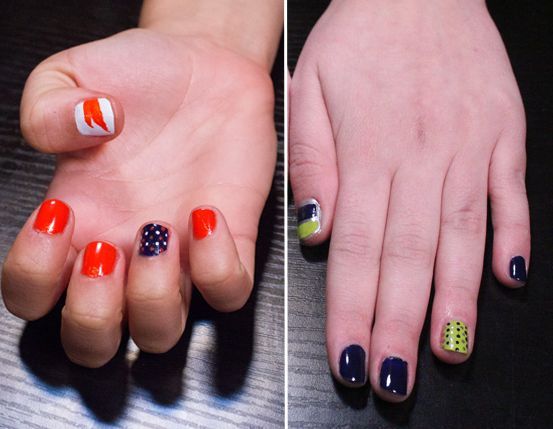 Laura McQuarrie — February 2, 2014 — Lifestyle
References: style.mtv & style.mtv
Share on Facebook Share on Twitter Share on LinkedIn Share on Pinterest
In anticipation of the Super Bowl XLVIII, MTV Style and COVERGIRL teamed up to create a Super Bowl nail art tutorial. The tutorial features two different manicured looks, one for each team. The nails for the Denver Broncos are made up of a color scheme of orange, blue and white and the second look for the rival team, the Seattle Seahawks, is green, blue and silver.

The step-by-step instructions for recreating the "fanicures" have been illustrated in GIF formats on the MTV Style blog, which makes it easy to see how the details were put into the more decorative nails. Some of the more intricate work includes painting on logos, stripes and small dots. The Super Bowl nail art may be a little more subtle than painting your face with the official team colors, but these looks are just as winning.
3.6
Score
Popularity
Activity
Freshness
Jeremy Gutsche Keynote Speaker