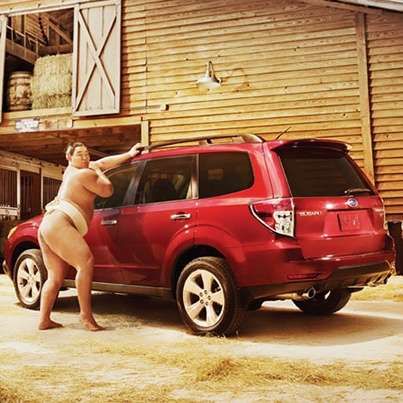 The idea is quite fresh: Let's get a couple of huge Japanese sumo wrestlers to pose seductively next to the new Subaru Forester 2009. That will show everyone that â€œJapanese SUVs just got a little sexier!â€ Right?

Well, creative director Andrew Simon at DDB, Toronto seems to think so. And the result is not sexy, but a totally hilarious print ad campaign that is sure to bring a smile to your face. I particularly like the analogy between Japanese SUVs and sumo wrestlers. The sumo wrestlers get all sexy at the car wash, gas station, and at a barn.