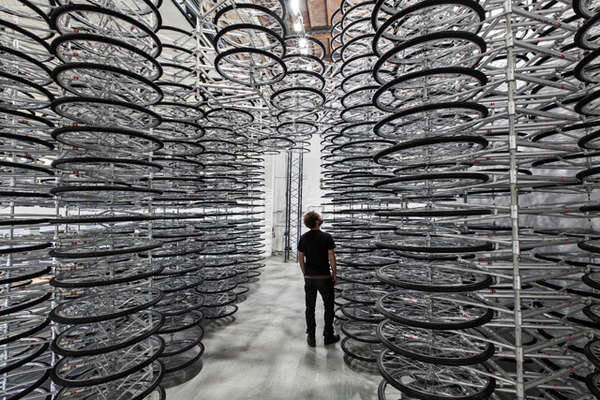 Meghan Young — January 10, 2013 — Lifestyle
References: galleriacontinua & thisiscolossal
Share on Facebook Share on Twitter Share on LinkedIn Share on Pinterest
Stacked by Ai Weiwei is the Chinese contemporary artist's first sculpture installed at the Galleria Continua in San Gimignano, Tuscany, Italy. Similar to his Forever Bicycle installation, there are slight differences that make one stand out from the other. For instance, as the name of the recent artwork suggests, the bikes have been stacked rather than fanned as with its predecessor.

Made up of 760 bicycles, Stacked by Ai Weiwei has been physically attached to create a single cohesive structure. Part of a larger exhibition at the gallery, it will be accompanied by a number of other sculptures, installations, video and photographs.

On display until mid-February, 2013, Stacked by Ai Weiwei is a visually striking art installation that will resonate with avid cyclists and non-cyclists alike, if for different reasons.
4.7
Score
Popularity
Activity
Freshness
Get the 2021 Trend Report FREE