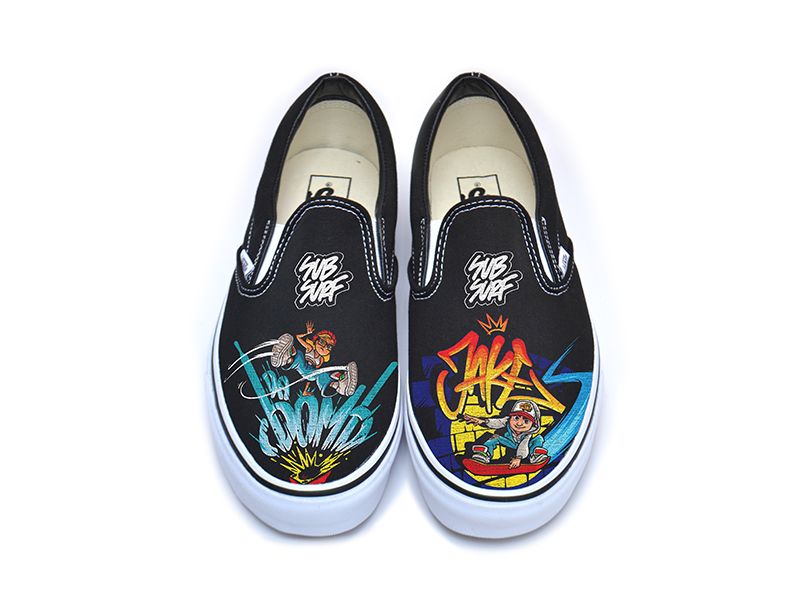 These Vibrant Sneakers are Inspired By the 'Subway Surfers' Mobile Game

Rahul Kalvapalle — October 22, 2018 — Fashion
References: theavelosangeles & prnewswire
Share on Facebook Share on Twitter Share on LinkedIn Share on Pinterest
Traditional stereotypes of gamers are becoming extinct with modern gaming enthusiasts taking pride in expressing their passion through their fashion choices — something which the SUBSURF Vans cater to in the form of splashy slip-on kicks, inspired by the popular mobile game Subway Surfers.

These eye-catching Vans eschew traditional tenets of visual symmetry and color composition, with each shoe in the pair paying tribute to a different character from Subway Surfers. The left shoe features a graphic of pack leader Jake, with the surrounding artwork paying tribute to his love of bold skate tricks and even bolder street art. Meanwhile, the right shoe is adorned with the charismatic female character Trick who is depicted doing the thing she does best - ripping up the dance floor with her fiery break-dance moves.

The slip-on design is a subtle nod to the carefree attitude of the modern mobile gamer. Splashy and soulful, the $99 SUBSURF Vans are a fantastic example of how sneaker fashion, skate style, and gaming culture interact and feed into one another.
3.9
Score
Popularity
Activity
Freshness
Get Better and Faster

Floral Slip-On Skate Shoes
Vans' Floral Pack Was Made in Collaboration with 'Size?'