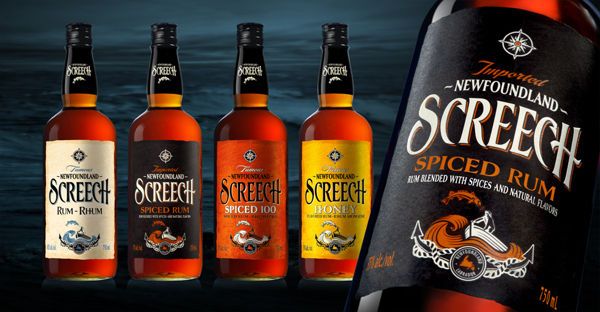 Laura McQuarrie — July 24, 2014 — Lifestyle
References: screechrum & thedieline
Share on Facebook Share on Twitter Share on LinkedIn Share on Pinterest
Although SCREECH Rum is loved coast to coast by many Canadians, the goal of rebranding its spiced rum bottles was to give the beverages a more global appeal. Screech Spiced Rum is the newest flavor from the company, as well as a new one that is exclusively being launched for an American market.

The new look for the spiced rum bottles was developed for SCREECH Rum by Linea to show off the brilliant amber color of the beverage. Although it's subtle because the bottles are so polished looking, they're designed to have a slightly aged look, as if they've been out at sea for a while. Other nautical elements on the rum bottles include compass details, rope, boats and clever fish hook shapes integrated into the letter "C," which are representative of the company's origins in Newfoundland.
2.9
Score
Popularity
Activity
Freshness
Get the 2021 Trend Report FREE