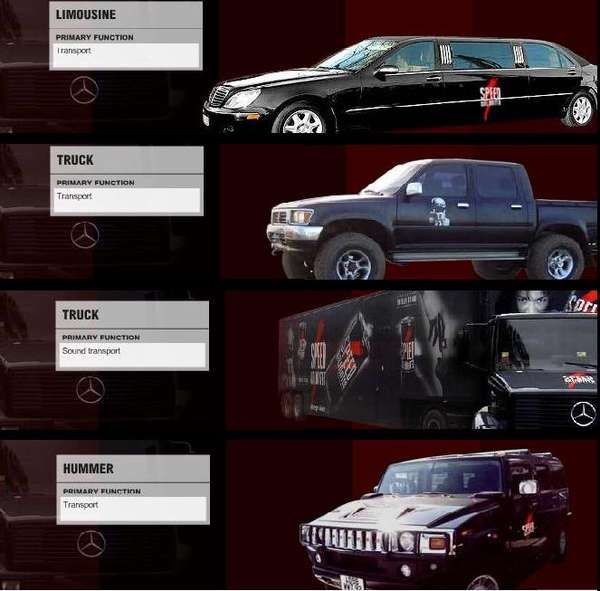 Hernando Gomez Salinas — June 27, 2006 — Autos
References: speed-unlimited.ar & trendhunterba.blogspot
Share on Facebook Share on Twitter Share on LinkedIn Share on Pinterest
Speed Unlimited is a fizzy drink from the Energy Drink category. The first one that came to Argentina in 1997. It was created in Austria. It contains Taurina, caffeine , vitamin b2, b6, c and minerals that promise to stimulate the body and give energy.
The promotional campaign, is launched from the website www.speed-unlimited.com.ar as a new army ready to combat. This army is composed by girls, fictitious armaments (in this case the product is combined with the blood, the brain and the body). Speed in its campaign considers itself as Irak, and shows that power is religion, and as a result, power is Speed. To show the power in a no-traditional way and without highlighting the characteristic of the product, it made an army of beautiful women ready for everything, that dance in discos, pubs, car races, motorcycle races, and motorboat races, etc. Some of them offer a show of lesbianism from places where everybody can watch them, they kiss and caress to be the center of attraction. Their contract with the enterprise says that they can't talk to the customers, they are a command group that do specific actions for promotion of the energy drink during a short time, and then they go to another point of promotion.
This summer in Buenos Aires the centre of operations was at â€œKUâ€ disco in Pinamar, at the seaside of the province, where there were two huge posters on the walls of the disco showing George Bush's face, the president of the United States and Yasser Arafat´s face, ex president of Palestine, highlighting that Speed is Religion.
Speed breaks ethical rules, achieves that everyone in the night life talk about their products. It doesn't appear as its competitors at traditional media (radio, TV, etc). Its marketing is based on actions in the points of the purchase, and in the streets with means of transport like vans, lorries, hummers, limousines, helicopters, etc.
5.4
Score
Popularity
Activity
Freshness
Access Advisory Services

68 Examples of Guerrilla Marketing
Literally to Metaphorically, Because Everyone Loves a Guerrilla