Too Hot for Takeoff 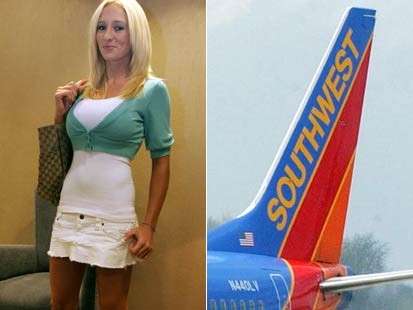 Kyla was just an innocent Hooters waitress trying to get from San Diego to Tuscon. Her attire (shown) was a tight white shirt and short denim skirt.

ABC notes, "Kyla Ebbert, a blond, shapely 23-year-old San Diego coed who also works shifts at a Hooters restaurant, boarded the flight to Tucson, Ariz., on a one-day round-trip visit to an Arizona doctor's appointment. She had settled into her seat when a flight attendant confronted her about what was later described by the airline as 'revealing attire.'"

Ironically, Kyla Ebbert told the Today Show, "I was humiliated, I was embarrassed... I felt like everyone was staring." Interesting. If she really didn't like the attention, she probably wouldn't want to go on the Today Show.

User-Upgradeable Laptops
The Framework Laptop is Easy to Customize, Repair and More