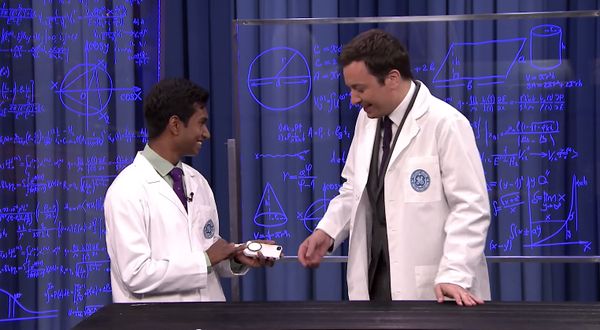 Laura McQuarrie — May 15, 2014 — Marketing
References: generalelectric.tumblr & convinceandconvert
Share on Facebook Share on Twitter Share on LinkedIn Share on Pinterest
General Electric teamed up with Jimmy Fallon for the 'Someone Should Invent' social media campaign, with 'Fallonventions' segments on The Tonight Show highlighting young inventors and their extremely bright ideas. In this particular #SomeoneShouldInvent segment, Fallon chats with 15-year-old Seattle inventor Suman Mulumudi, who shares his brilliant phone case and digital stethoscope, the Steth IO.

As well as awe-inspiring creations like these, Fallon came up with and shared a few silly inventions of his own, like leg packs, which are miniature backpacks for your knees. All of this is being used to launch GE's crowdsourced social media campaign where people are asked to propose new ideas for things that should exist with the #SomeoneShouldInvent tag. Some of the most outrageous ideas get turned into GIFs and get posted on GE's Tumblr account.
5.6
Score
Popularity
Activity
Freshness
Get Trend Hunter Dashboard