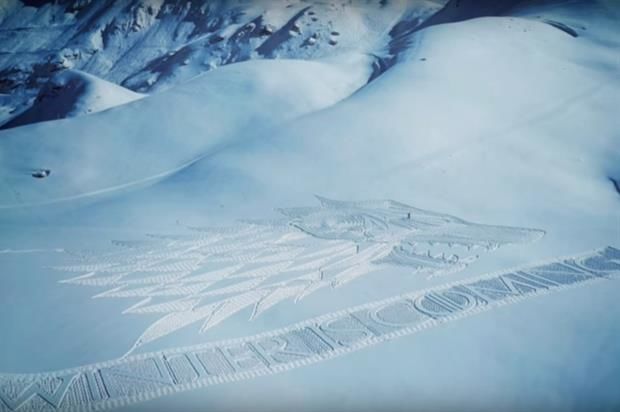 Rebecca Byers — March 8, 2016 — Marketing
References: youtube & eventmagazine
Share on Facebook Share on Twitter Share on LinkedIn Share on Pinterest
In order to celebrate the impending sixth season of cult television series Game of Thrones, Sky Atlantic teamed up with artist Simon Beck to create a very impressive snow mural in the French Alps. The bright, mesmerizing snow mural depicts the House of Stark’s insignia, a tribute to Jon Snow, and featured 'Winter is Coming,' in the franchise's signature font.

The creation of the snow mural in the French Alps required Beck to walk 32.5-kilometers over a period of 13-hours in order to mark out the emblem and text in the snow.

The sixth season of Game of Thrones is set to debut on April 25, 2016, and notably, will be simulcast on Sky Atlantic at 2AM, when it will premiere in the US.
3.7
Score
Popularity
Activity
Freshness
Attend Future Festival

Throne-Themed Gingerbread
As Far As Awesome Gingerbread House Ideas Go, This One is King