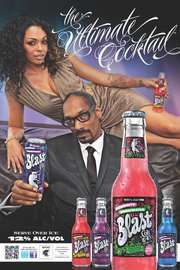 The company has already begun sponsoring concerts that feature giveaways of the beverage along with other promotional items like t-shirts and hats. Snoop has also released a Blast by Colt 45 sponsored mixtape entitled ‘PuffPassTuesday.’ Check out the video to see behind the scenes clips of Blast’s first promotional photoshoot.