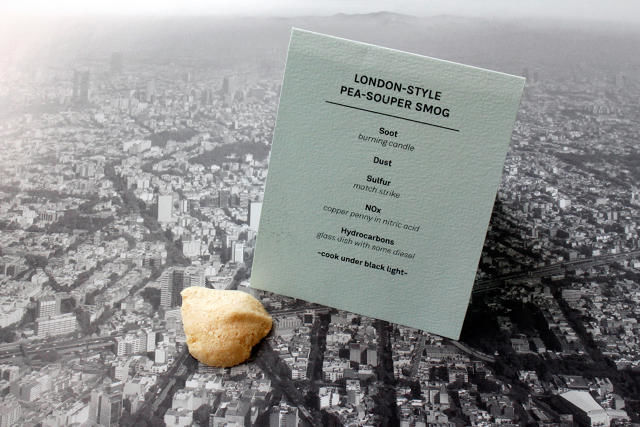 Katherine Pendrill — June 6, 2015 — Social Good
References: fastcoexist & magazine.good.is
Share on Facebook Share on Twitter Share on LinkedIn Share on Pinterest
A new project launched by the 'Edible Geography' blog, the Center for Genomic Gastronomy and the Finnish Cultural Institute, offers customers a taste of its smog-infused desserts as a means of sparking conversation about global population. Smog currently kills an estimated seven million people worldwide, and the project is designed to help raise awareness about the severity of the issue.

To promote conversation, the team put together a line of edible meringue cookies distilled from the smog of different cities around the world. The team then set up a food cart at New York's New Museum and offered customers a taste of its smog-infused desserts. Attendees had the opportunity to taste the custom cookies made from flavors such as 'Atlanta-Style Biogenic Photochemical Smog' and 'London-Style Pea-Souper Smog.'

Though the project may seem extreme, the team wants urban dwellers to begin thinking more about the air they are breathing. So if you find yourself asking if such cookies are safe to eat, it may be time to think about whether the air around us is safe to breathe.
2.9
Score
Popularity
Activity
Freshness
Access Advisory Services