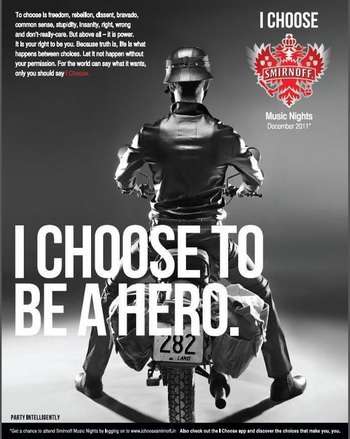 Smirnoff 'I Choose' Campaign Looks for "Heros" and "Screamers"

According to Popsop, the campaign's main theme centers on a man who is trying to discover his own identity and achieve a balance between fitting in and standing out. In addition to the print ads, the campaign includes an app and dedicated site that lets customers "discover their personality and upload the results" through social media like Twitter and Facebook.

In a market mainly dominated by beer and whiskey, Smirnoff hopes to appeal to male consumers who wouldn't otherwise choose vodka as their beverage of choice. Creative Supervisor of JWT Mumbai Mayuresh Dubhashi points out, "There is a quest of building identity, which boils down to a choice. Smirnoff gives them the belief that at the end of the day to choose is power because life is what happens between choices."
3.1
Score
Popularity
Activity
Freshness
Get the 2021 Trend Report FREE

Tea Turf Wars
Boyz in the Hillz for Smirnoff Ice