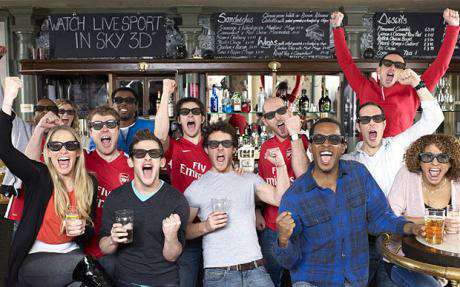 Brian G Randles — January 29, 2010 — Business
References: news.bbc & engadget
Sunday, January 31, 2010 will mark a historic day for soccer (football) fans in England. The game (match) between Arsenal and Manchester United will be available in 3D in bars (pubs) in London, Manchester, Cardiff and Edinburgh.

Sky TV (English TV channel) is offering the three dimensional option for the sporting event, and looks to make it an even more prevalent viewing option for the public by making it available to hundreds more pubs in April.

No way to tell how it will be received in England, but it will sure make for some interesting commentary from the Sky TV announcers who probably can’t even work a computer. Check out more on the move by Sky TV at the links below.
3.3
Score
Popularity
Activity
Freshness