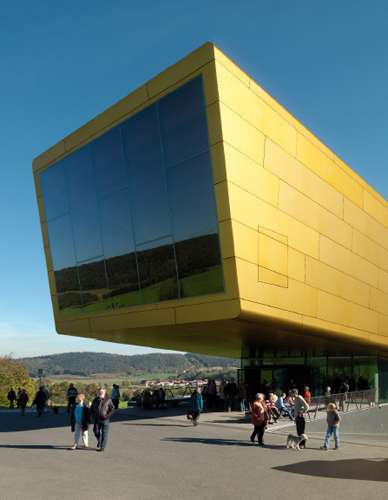 The Sky Disk Artifact Gives the Nebra Ark Its Inspiration

Jessica Marcel — September 19, 2009 — World
References: en.wikipedia.org & dailytonic
The architects at Holzer Kobler used the Sky Disk artifact as inspiration for the Nebra Ark visitors’ center in Germany. The Swiss company did the mysterious artifact justice with their floating architectural masterpiece.

The Sky Disk, a relic believed to be from around 1600 B.C., was discovered in 2001. The style of the artifact (which has a strange resemblance to a smiley face…) made historians and archaeologists believe it a forgery, but the authenticity of the piece has been confirmed. Nebra Ark was constructed to mark the site of the discovery.

The visitors’ center is a study in bold lines and space age architecture. The Observation Tower looks like it came right out of a sci-fi flick. It’s only been eight years since the discovery of the Sky Disk and, if the Nebra Ark is any indicator, the artifact will inspire artists for years to come.
4.7
Score
Popularity
Activity
Freshness