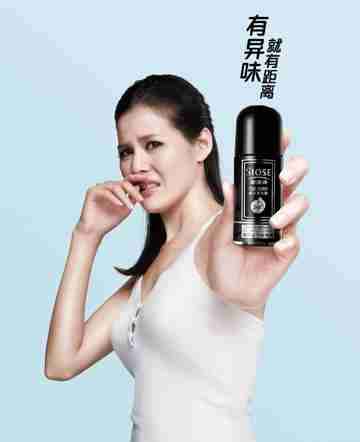 Katie Cordrey — October 20, 2011 — Marketing
References: adsofchina & adsoftheworld
Share on Facebook Share on Twitter Share on LinkedIn Share on Pinterest
Ads for Siose Antiperspirant Roll-on Deodorant for Men have been strategically installed on bus doors in China, where they are being exposed to the arm pits of passengers grasping the handrail above their heads. The out-of-home ad campaign uses the image of an attractive young woman reacting to an unpleasant odor, seemingly coming from a nearby armpit, in order to make the point that not using a deodorant may result in other people keeping a distance.

A creative team at Invisible Advertising of Guangzhou, China created the ingenious Siose Antiperspirant ads to target its potential customers, young males, as they ride the bus. The ad proves that clever message placement and content can give advertisers the opportunity for a consumer's second look. When combined with humor, messages with unexpected placement are better-received and more often remembered by consumers.
1.7
Score
Popularity
Activity
Freshness
View Innovation Webinars