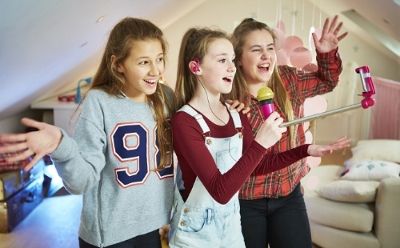 The 'SelfieMic' Combines a Selfie Stick with Karaoke

The selfie stick toy has a slot for a smartphone, which is used alongside a microphone, an earpiece and a companion music app. With this setup, kids are able to create their own music videos, record their voices singing or lip sync to millions of available songs.

While creating a music video typically involves someone to be behind and in front of the camera, the SelfieMic makes it even easier for kids to produce their own entertainment. With special voice and video effects, kids will be feeling like superstars in no time.
3.7
Score
Popularity
Activity
Freshness
Get Trend Hunter Dashboard