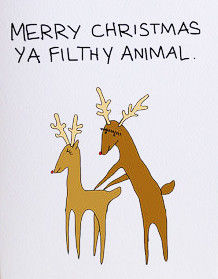 You might remember the infamous line from the movie 'Home Alone,' which is centered around a tenacious eight-year-old who defends his home from an attempted burglary. In the film, Macaulay Culkin's character Kevin uses the line, also from a film, to trick the bad guys. The line originally appeared in 1938 film 'Angels with Dirty Faces,' starring James Cagney and Humphrey Bogart.

If you know someone who's been a little naughtier than nice this holiday season, they'll definitely appreciate the crass humor of this comical Christmas card.
3.2
Score
Popularity
Activity
Freshness
Get Trend Hunter Dashboard