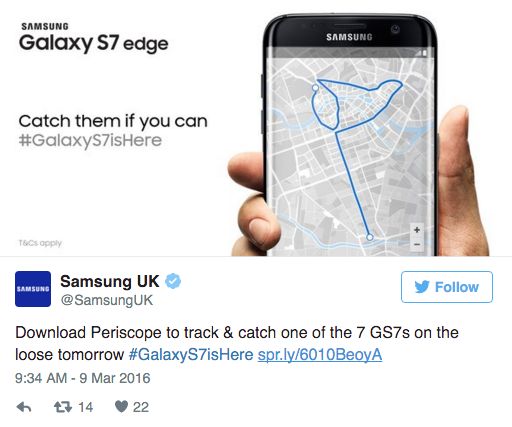 Laura McQuarrie — March 22, 2016 — Marketing
References: samsung & wersm
Share on Facebook Share on Twitter Share on LinkedIn Share on Pinterest
In order to celebrate the launch of the Galaxy S7 smartphone in the UK, Samsung created a nationwide scavenger hunt that made use of Periscope. To make it as simple as possible, the brand chose to hide seven phones across seven UK cities.

To entice people across the UK to join in the smartphone search, Samsung posted teasers to Twitter and broadcast footage from its Periscope account. To make the campaign a bit more challenging for seasoned social media users, the phones moved to different locations with help from BMX riders, skateboarders and more daring messengers.

Once a phone was found in the real world, people simple had to shout: "the Galaxy S7 is here!" in order to win the phone. Considering that many campaigns would have users take their voices online with a branded hashtag, this is a comically simple and effective way to make noise on the streets.
1.3
Score
Popularity
Activity
Freshness
Get Trend Hunter Dashboard