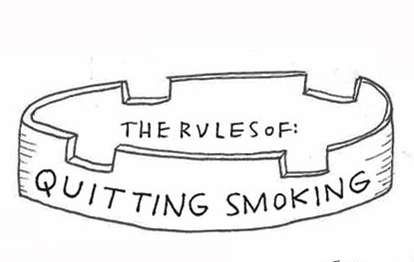 'The Rules of Quitting Smoking' Nixes Vices in the Butt

Marie C. Hudson — August 27, 2011 — Lifestyle
References: good.is & good.is
Share on Facebook Share on Twitter Share on LinkedIn Share on Pinterest
Cigarette addictions are no laughing matter, but 'The Rules of Quitting Smoking' by Christie Young of GOOD is a lighthearted illustration of the difficulties many smokers face while trying to kick the habit in the butt, if you will.

I always love Young's illustrated guides for her ability to deal with real issues faced by so many women, in a clever and often hilarious way. 'The Rules of Quitting Smoking' is no different, beginning with the statement, "Follow up hot yoga with a cigarette and iced coffee," which is all too true to the lives of many young smokers I know!

Christie Young's 'The Rules of Quitting Smoking' is incredibly realistic, and will reassure any smokers dealing with the difficulties of kicking the habit that they're not alone. I just hope anyone trying to quit is eventually successful and doesn't spend too many nights smoking "half a pack over Patsy Cline," as this chart reads.
4.3
Score
Popularity
Activity
Freshness
Access Advisory Services

50 Infographics For Community Managers
From Content Stats to Networking Guides