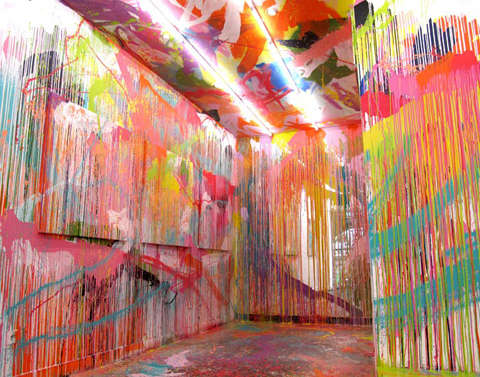 Michael Hemsworth — April 5, 2013 — Art & Design
References: martinich.au & sweet-station
Share on Facebook Share on Twitter Share on LinkedIn Share on Pinterest
Some might mistake the work of Rowena Martinich as graffiti, but it's much more than that because of the sophisticated attention to breaking traditional perceptions of conceptual art. Her work is usually displayed in the public sphere in places like shop displays or cafes as well as in private showings in studios, but it's her ability to transcend the everyday by being unnoticed and noticed all at once that speaks to her ability.

Martinich's work might be overlooked in a public space and revered as spectacular in the confines of an exhibition, which is something she tries to combat as an artist on the regular. Finding the perfect mix of spontaneity that's attached to public installations while still being respected as a creator is something many artists combat against.

Check out Martinich on her personal site for more examples of her fantastic technique.
4.2
Score
Popularity
Activity
Freshness
Get Trend Hunter Dashboard