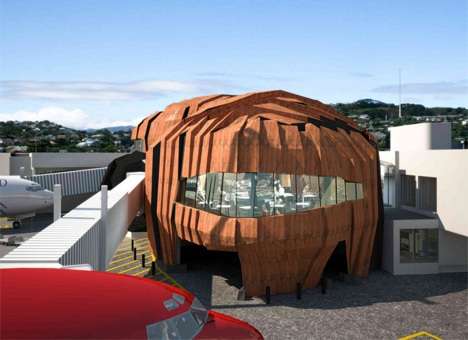 The Rock at Wellington Airport

Ayman — March 3, 2008 — Art & Design
References: scoop.co.nz
Share on Facebook Share on Twitter Share on LinkedIn Share on Pinterest
They were aiming for a radical departure from airport design, and they surely got it. New Zealand's Wellington Airport has unveiled the design for the final element of its international passenger terminal, which it is calling "the Rock". The bold and dramatic unique addition is part of its international terminal upgrade, the first stage of which was completed last year. The second stage, due to be completed in 2009, will feature expanded and redesigned international departure lounge building with extra lounge seating for 660, improved waiting and queuing areas to gates, additional toilets and a new cafe, as well as another airbridge.

Steven Fitzgerald, Wellington Airport CEO, said the $39 million Rock's â€œradical departure from traditional airport design worldwide is entirely deliberate. What is set to become New Zealand's newest iconic building, The Rock combines functionality and capacity with what will be a memorable visitor experience. It's edgy and in keeping with our Wild at Heart attitude, reflecting Wellington's status as a vibrant and daring cultural city. With our commitment to regional tourism and further developing international services, we are creating the airport to take Wellington into the next decade."
0.3
Score
Popularity
Activity
Freshness
View Innovation Webinars