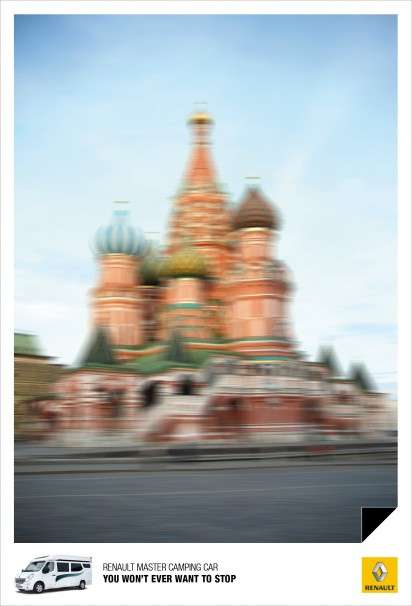 Meghan Young — May 1, 2013 — Autos
References: publicisgroupe & ibelieveinadv
Share on Facebook Share on Twitter Share on LinkedIn Share on Pinterest
The Renault Master Camping Car ad campaign shows people that the vehicle performs so well on so many different levels, the driver will find him- or herself driving past must-see landmarks without a second thought. Thankfully, the blurred images of the Leaning Tower of Pisa and Saint Basil's Cathedral is still recognizable.

Conceived and executed by Publicis Conseil, an ad agency based in Paris, France, the Renault Master Camping Car ad campaign reads, "You won't ever want to stop." It was art directed by Bénédicte Potel with creative direction by Hervé Riffault and Olivier Altmann. By making an association between such timeless and magnificent sights and the camping vehicle, the ad campaign manages to put them on the same level. Actually, it can be argued that the Renault Master Camping Car surpasses them.
2.3
Score
Popularity
Activity
Freshness
View Innovation Webinars