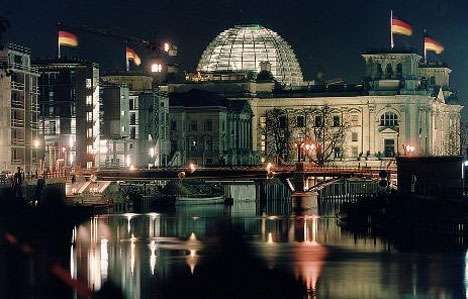 Bianca — March 30, 2008 — Eco
References: treehugger
Share on Facebook Share on Twitter Share on LinkedIn Share on Pinterest
When you see this illuminated dome you probably don't think, "Ooh, that's the most eco-friendly looking piece of architecture I've ever seen," but I'll have to remind you that looks can be very deceiving. Take another look, because in the future, those could be your very thoughts.

This German parliament building in Berlin, the Reichstag, is expected to the become the most green building in the world after current renovations are completed. As soon as this summer, the whole building will be running on renewable energy, from the sun, wind and water.


(The first two images are from TreeHugger via HGM2004 and Foster + Partners, the other images from Flickr.)
1.7
Score
Popularity
Activity
Freshness
View Innovation Webinars