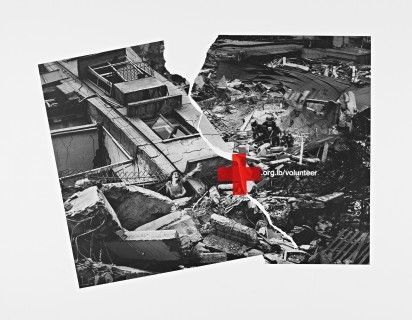 Meghan Young — March 20, 2012 — Marketing
References: yr & ibelieveinadv
Share on Facebook Share on Twitter Share on LinkedIn Share on Pinterest
The Red Cross Lebanon campaign features torn images of natural disasters and other similar emergency scenarios that have been taped up using the iconic Red Cross logo. Following the footsteps of the Brazilian Red Cross ad campaign, this set of print ads are also shot completely in black and white, which allows the bright red branding to stand out even more.

Conceived and executed by Y&R, an ad agency based in Dubai, United Arab Emirates, the Red Cross Lebanon campaign stitches together the images in such a way that the humanitarian workers are positioned a lot closer to the victims, illustrating their role in saving lives on a daily basis.

The Red Cross Lebanon campaign was art directed by Sajesh Pudussery with photography by Mojtaba Komeili and post production by Gitten Tom.
1.3
Score
Popularity
Activity
Freshness
Get Better and Faster