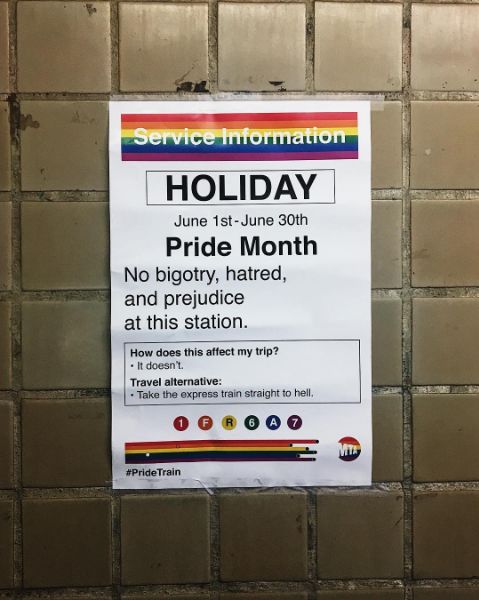 Katherine Pendrill — June 12, 2017 — Marketing
References: instagram & adweek
Share on Facebook Share on Twitter Share on LinkedIn Share on Pinterest
In honor of Pride Month 2017, a team of NYC ad creatives decided to create some clever Pride posters to decorate "the darkest place in New York City:" the subway. The campaign not only aims to raise awareness for Pride Month, but also aims to make a statement about the fact that the US President has yet to publicly acknowledge Pride Month.

The Pride posters were created by Thomas Shim, a global creative director at Y&R, and freelance art directors Ezequiel Consoli and Jack Welles. The creatives decided to draw inspiration from the classic MTA posters that line New York's subway system. The trio began by copying the font and messaging style used for official MTA posters, but added a rainbow flag and LGTBQ-positive messages such as "No bigotry, hatred, and prejudice at this station." To top it off, the creatives even designed rainbow stickers to be placed directly below the American flags found on the exterior of many of the subway cars.

By drawing inspiration from some of the most widely recognizable ads in the city, the new Pride posters make a powerful statement about the fact that Pride Month is important to New York City.
1.9
Score
Popularity
Activity
Freshness
Get the 2021 Trend Report FREE