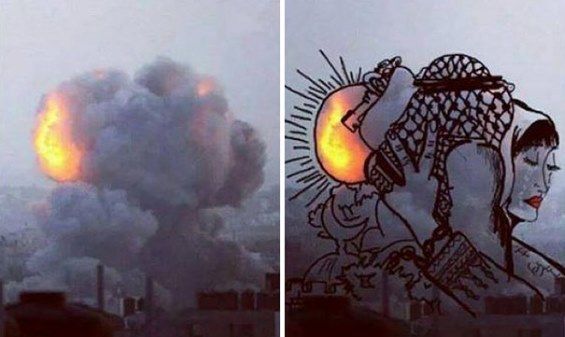 Meghan Young — July 30, 2014 — Social Good
References: demilked & beautifuldecay
Share on Facebook Share on Twitter Share on LinkedIn Share on Pinterest
The rising conflict between Israel and Palastine has resulted in a ton of media coverage; artists have re-appropriated many of the devastating photographs to create powerful bomb illustrations. Belal Khaled has already been featured, but artists including Tawfik Gebreel and Bushra Shanan have joined him to humanize the smoke and ashes that are the remnants of rocket explosions and other attacks in Gaza.

From the faces of children to a fist in the air and an appeal to freedom and victory, these powerful bomb illustrations change images of destruction into ones of hope and promise. Beautiful Decay writes, "These simple, yet powerful, illustrations give these Palestinian artists a voice that they might otherwise not be given, a voice that tells a different story than the ones represented in the original photographs."
4.5
Score
Popularity
Activity
Freshness
Attend Future Festival