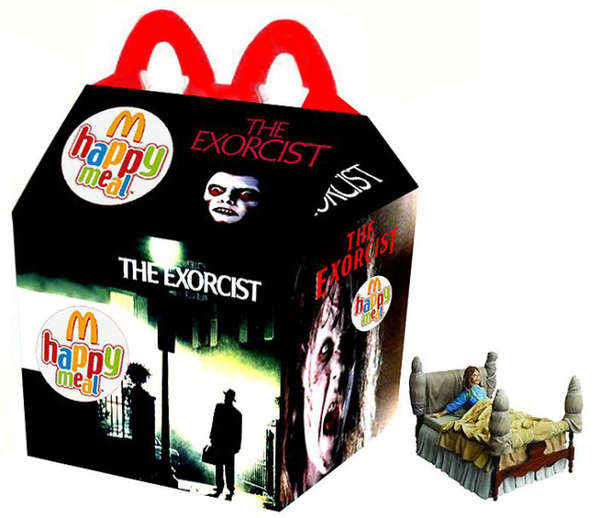 — July 25, 2013 — Pop Culture
References: pleated-jeans & lostateminor
Share on Facebook Share on Twitter Share on LinkedIn Share on Pinterest
Newt Clements has created some absolutely spectacular mashup art with his new Happy Meal boxes featuring pop culture films. Each of his fast food boxes displays the iconic golden McDonald's arches, but features a design from a popular movie, from the Golden Age of Hollywood all the way through television shows of the 1990s. Most of the films used in Clements's designs are a bit old for children, making for some deliciously twisted creations.

A personal favorite is a Happy Meal box displaying images from 'The Exorcist.' The toy that comes with this meal is a figurine of Reagan, the iconic devil-child of the film, in her bed, green teeth bared, and with a head that, rotates all the way round.

By juxtaposing classic films with a children's meal, Clements has created darkly humorous series that most people would love to see in their local fast food restaurant.
2.7
Score
Popularity
Activity
Freshness
Get the 2021 Trend Report FREE