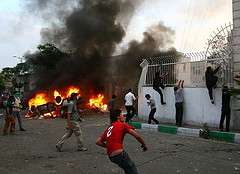 Katie Cordrey — June 16, 2009 — Social Good
References: blog.twitter
President Obama told protesters in Iran that they should "know that the world is watching" what's happening in that country, but that 'watch' might have been interrupted by scheduled system maintenance that would have shut down Twitter for an hour and a half.

Twitterers rallied around the ‘#nomaintenance’ hashtag in order to encourage Twitter to keep the service open. The hashtag neared the top of Twitter's trending list, but Twitter claimed the network maintenance was out of their control and that it would go on as planned.

Under continuing pressure, and thanks to their New York-based network provider, Twitter's plans changed when Twitter announced, “Our network partners at NTT America recognize the role Twitter is currently playing as an important communication tool in Iran,” they posted to the company blog. “Tonight’s planned maintenance has been rescheduled to tomorrow between 2-3p PST,” with a helpful note that that’s “1:30a in Iran.”

The elections earlier this year in Moldovia and this one in Iran illustrate the increasingly powerful role that the voice of the individual and the services of carriers like Twitter play in our understanding of world events.
1.7
Score
Popularity
Activity
Freshness