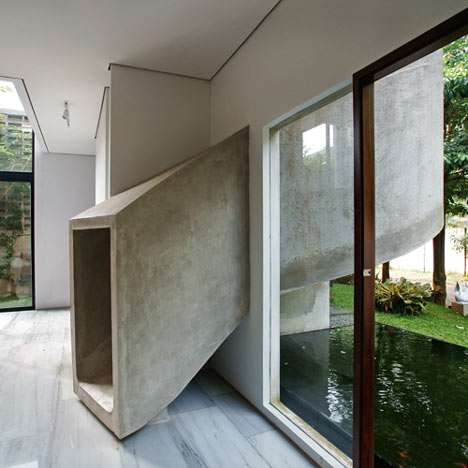 Amelia Roblin — August 31, 2010 — Art & Design
References: dezeen & apartmenttherapy
One might expect dry sophisticated design from an open-concept concrete home in a tight-knit suburb, but this assumption could not be further from the true character of the ‘Playhouse’ by Aboday.

The residence, constructed on a corner lot near Jakarta, is equipped with a sturdy spiral slide that connects a child’s bedroom with the kitchen. Among its other more playful attributes, the ‘Playhouse’ by Abadoy is contrived with bridge-like second-storey hallways, ten-meter ceilings, suspended fans and undulating railings. Photographer Happy Lim expertly captures a wide range of views of the ‘Playhouse’ and its diversified living and playing spaces.
5.2
Score
Popularity
Activity
Freshness