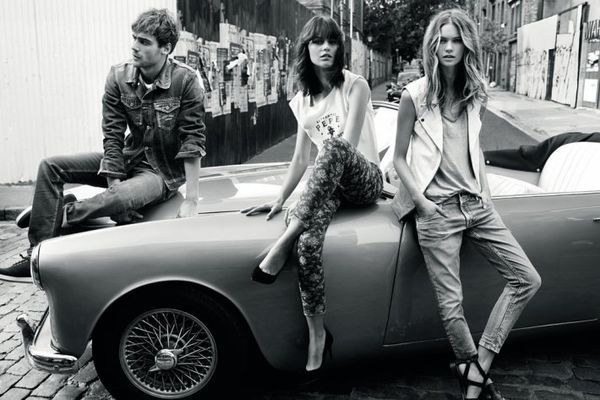 Meghan Young — February 5, 2014 — Fashion
References: pepejeans & thefashionisto
Share on Facebook Share on Twitter Share on LinkedIn Share on Pinterest
Shot entirely in black and white, the Pepe Jeans London SS14 ad campaign is given a bit of a retro appeal even though the designs are steeped in modernity. Nevertheless, it embraces the cool cat attitude present in such classics as 'West Side Story' and 'Grease,' without being overly banal about the influence. Not to mention that it adds a timelessness to the looks.

Starring models Behati Prinsloo, Marta Dyks and George Alsford, the Pepe Jeans London SS14 ad campaign was lensed by photographer Josh Olins. Complementing the denim pieces with plaid, casual tees and bomber jackets, stylist Clare Richardson expertly outfitted the gang in a way that will appeal to many. Captured against a cobblestone backdrop with a classic car as the perfect prop, the ad campaign will capture people's attention instantly.
5.3
Score
Popularity
Activity
Freshness
Get Better and Faster