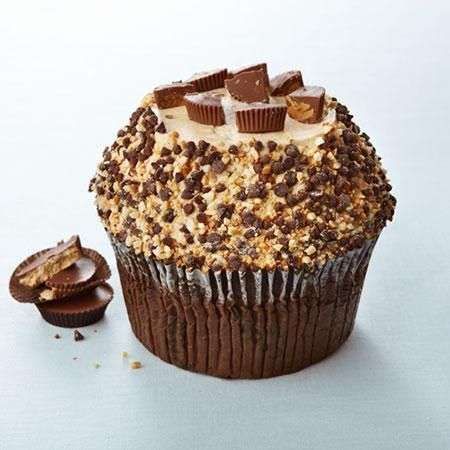 Meghan Young — April 4, 2013 — Lifestyle
References: crumbs & neatorama
Share on Facebook Share on Twitter Share on LinkedIn Share on Pinterest
For those who truly love cupcakes, one is sometimes not enough, unless it is the Peanut Butter Cup Colossal. An enormous cupcake, some may see it necessary to drop the 'cup' and simply keep the 'cake.' That is because it is basically one big cake made to resemble a cupcake, paper liner and all.

Made by Crumbs Bake Shop, the Peanut Butter Cup Colossal is capable of serving six to eight people. But as John Farrier of Neatorama states, "I think that's 6-8 unambitious people." A rich chocolate cake filled and frosted with Crumbs' signature peanut butter buttercream frosting, topped with peanut butter cup wedges and edged in crushed peanuts and chocolate chips, how could people stop at one slice?
1.2
Score
Popularity
Activity
Freshness
Get Trend Hunter Dashboard