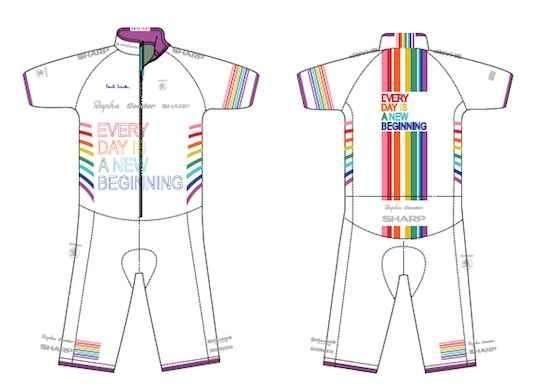 Luke James Thomas Bradley — June 14, 2011 — Lifestyle
References: rapha.cc & paulsmith
Share on Facebook Share on Twitter Share on LinkedIn Share on Pinterest
Sir Paul Smith, long known for his love of pro cycling, has once again lent his design chops to a racing collaboration. With this extremely limited edition of only 150 jerseys, a portion of the proceeds will benefit Japan Earthquake Appeal. These jerseys were sported by the Rapha/Condor/Sharp team during the London Nocturne Cycle race earlier this month. Smith describes them as "bright, positive and colorful." They feature the slogan "Every Day is a New Beginning" and boast Smith's traditional rainbow stripes on a white background. Of course, the iconic Paul Smith signature also graces the jerseys.

While these are built to the specifications of elite athletes, they will most likely end up being collector's items. With British cycling culture enjoying a surge, you are advised to act fast in trying to snag one of these!
3.8
Score
Popularity
Activity
Freshness
Attend Future Festival

Waterproof Cyclist Clothing
The Supermarine Rain Shirt by Outlier Inc. Will Keep You From the Wet