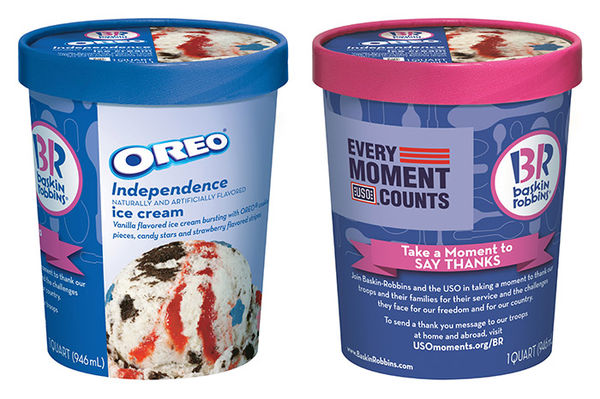 Laura McQuarrie — May 26, 2014 — Lifestyle
References: news.baskinrobbins & brandeating
Just in time for Memorial Day and ahead of Independence Day, Baskin-Robbins introduced a new Oreo cookie ice cream, in honor of the armed services and their families.

Baskin-Robbins partnered with the USO (United Service Organizations) and pays tribute to America's troops with a Oreo cookie ice cream, mixed with patriotic blue candy stars and stripes of strawberry-flavored sauce, which makes it a pretty tasty version of the flag and a super easy themed dessert to bring to a summer party or barbecue.

The ice cream is only available in pre-packaged containers and will be available through the summer, until September. This partnership also has Baskin-Robbins supporting the USO's 'Every Moment Counts' campaign and encourages Americans to send a virtual thank you message to troops through USO.
2.1
Score
Popularity
Activity
Freshness