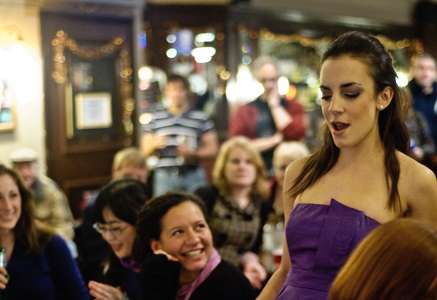 Meghan Young — August 19, 2011 — Unique
References: guardian & psfk
Share on Facebook Share on Twitter Share on LinkedIn Share on Pinterest
It is only natural that as time moves forward and the interests of modern generations change, the world loses once important art forms ad pastimes; enter Opera Up Close. This unique company is fighting tooth and nail to make sure that isn’t the case with their operatic art form. By participating in and propelling forward the fringe opera movement, Opera Up Close is bringing their theatrical performances to the people, instead of the other way around.

La Bohème, the debut production of Opera Up Close, is currently being performed in small pubs and venues across London. Written and directed by Robin Norton-Hale, the production has made such an impact already that it won an Olivier award. Opera Up Close is well-deserving as it is attracting new audiences by making operas appear less elitist and daunting.
1.9
Score
Popularity
Activity
Freshness
Jeremy Gutsche Keynote Speaker