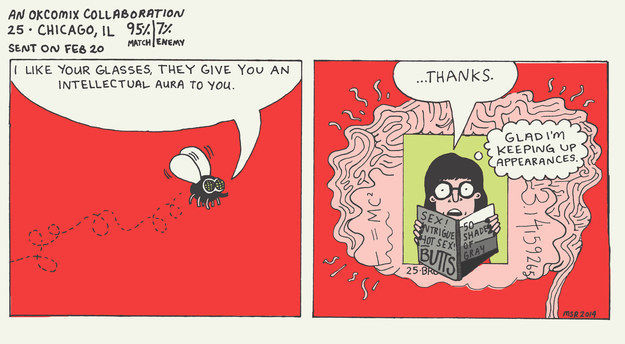 Alyson Wyers — August 29, 2014 — Naughty
References: okcomix.tumblr & buzzfeed
While many others are documenting their experiences with internet romance in the form of an online dating blog, Molly Roth is creating comics of weird OkCupid messages she's received. Aiming to use real messages from real people, her tumblr OkComix turns the shockingly strange into funny comics.

Most of the creepy communication featured in the online dating blog leaves the reader in disbelief. The men in her comics are often portrayed not as a human, but as an animal, character or object. For example, one male suitor asking if he could reach The Little Prince to Roth's cat is portrayed as the Little Prince himself. Meanwhile Molly is typically illustrated as herself, sometimes with thought bubbles added to highlight the absurdity of the messages.
0.7
Score
Popularity
Activity
Freshness

Comedic Concierge Conversation Blogs
How May We Hate You? is One of This Year's Most Viral Blogs