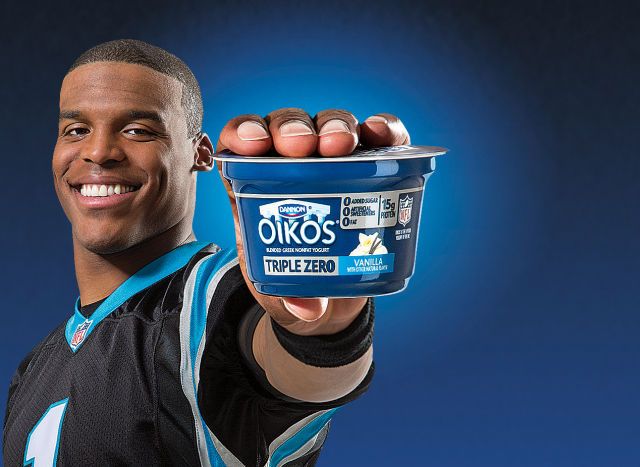 Laura McQuarrie — February 2, 2015 — Lifestyle
References: oikosyogurt & brandeating
Share on Facebook Share on Twitter Share on LinkedIn Share on Pinterest
With the hopes of appealing to men, Dannon's Oikos Triple Zero has been named the Official Yogurt of the NFL. The 'Triple Zero' part of the yogurt comes from the snack having zero added sugar, zero fat and zero artificial sweeteners—instead, this yogurt is naturally sweetened with zero-calorie Stevia, which is a great sugar substitute. The yogurt comes in a total of six flavors, including Banana Crème, Coconut Crème, Mixed Berry, Peach, Strawberry and Vanilla, providing 15 grams of protein per each 5.3-oz single-serve cup. As well, this yogurt is also being sold in larger quart sizes.

In terms of having this yogurt hit home with a male audience, Dannon is teaming up with NFL quarterback Cam Newton to promote the snack.
2.7
Score
Popularity
Activity
Freshness
Get Better and Faster