Voting Like the Stars
Next
Set of
Related
Ideas 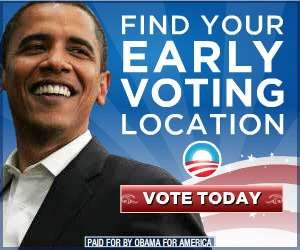 To influence the chances of early voting, the Democratic presidential nominee decided to target the blogosphere with ads like the one seen above.

The first ad, featuring a smiling Obama says, "Find Your Early Voting Location," the second uses the same cheesy smiling Obama on the side of a lunch box which reads, "Vote for Barack Obama on Your Lunch Hour," while in the third, he looks more series alongside copy that reads, "New Mexico Find Your Early Vote Location" and finally, the last asks the simple question: "Have You Voted Yet?"
2.8
Score
Popularity
Activity
Freshness
View Innovation Webinars