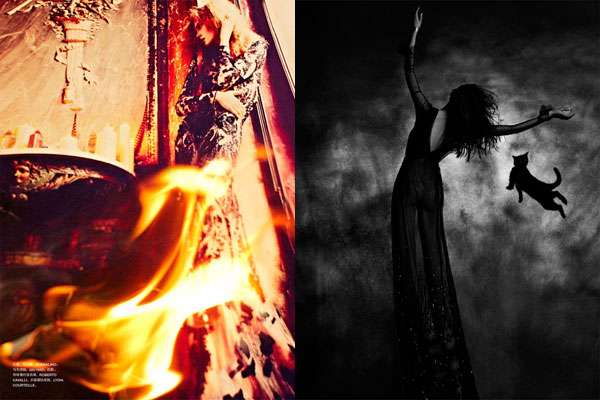 Meghan Young — April 2, 2012 — Fashion
References: numero-magazine & fashiongonerogue
Share on Facebook Share on Twitter Share on LinkedIn Share on Pinterest
Dark, spellbinding and dramatic, the Numero China April 2012 editorial stars the enchanting model Nimue Smit. The sorceress-like photo shoot was lensed by Txema Yeste. Based in Barcelona, Spain, this international photographer is known for his avante-garde fashion photography. He doesn't disappoint on this front when it comes to his most recent shoot.

The Numero China April 2012 editorial is filled with experimental imagery that both hides and reveals the model's form. Thanks to the styling of fashion editor Tim Lim, the Dutch beauty is never lost in the shot. Instead, she stands out in deviant designs from fashion houses such as Miu Miu, Yohji Yamamoto, Roberto Cavalli and Haider Ackermann. Her moody and mystical looks were finished with dark lips and messy locks by makeup artist Victor Alvarez and hairstylist Marion Anée.