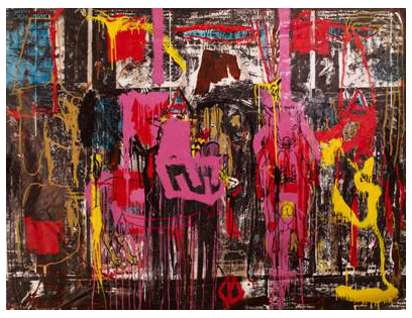 The paintings have a melting effect, with colors that trickle into one another to create a unique aesthetic. Nicolas Pol also creates a chaotic look with an array of colorings juxtaposed with one another. According to Pol, the exhibition, which is titled "Sick Atavus of the New Blood," is meant to represent morbidity and violence with reference to "technological paranoia." There is so much to look at in these paintings, it's hard to fully appreciate their complexity without spending a few moments to recognize the intricate detail Pol puts in his work.