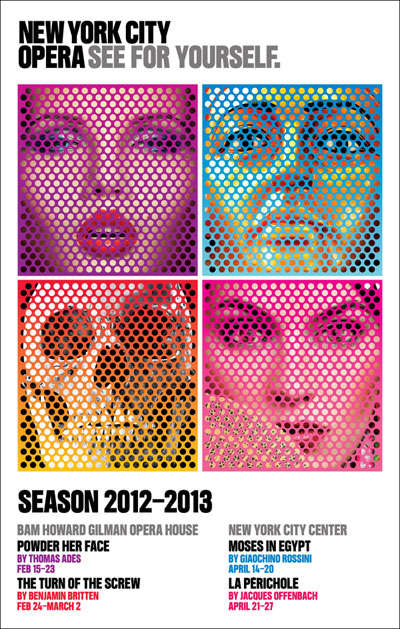 Meghan Young — March 31, 2013 — Marketing
References: danielforkin & behance.net
Share on Facebook Share on Twitter Share on LinkedIn Share on Pinterest
When a person thinks about the opera, they will probably conjure up an image of a stuffy, overdressed audience and performers that belong in another era; the New York City Opera 2013 ad campaign dashes away those assumptions immediately. Vibrantly modern with an air of mystery, the print and billboard ads show that the opera is far from boring in the Big Apple. Thus it hopes to attracts a whole new crowd.

Designed by Daniel Forkin, the New York City Opera 2013 ad campaign specifically promotes the productions "Powder Her Face," "The Turn of the Screw," "Moses in Egypt" and "La Perichole." It features portraits that encapsulate each theme in the operas, which are then overlaid with a perforated graphic to give it an even more contemporary edge. The operas are promoted separately and together to great effect.
5.3
Score
Popularity
Activity
Freshness
Get the 2021 Trend Report FREE