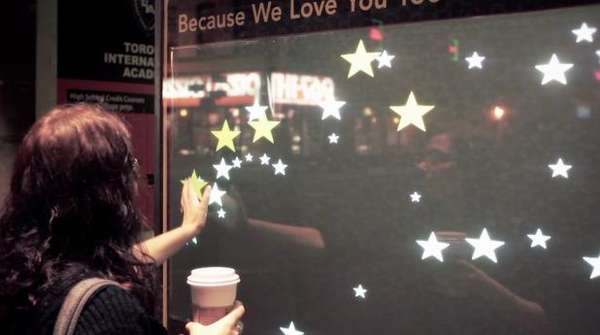 Katherinev123 — October 21, 2011 — Marketing
References: themediamerchants.blogspot & brandchannel
Share on Facebook Share on Twitter Share on LinkedIn Share on Pinterest
Mega coffee chain Starbucks is launching the My Starbucks Rewards program in Canada -- specifically in the major cities of Toronto and Vancouver. To launch it, the company has installed interactive storefronts at its highest traffic locations. These interactive storefronts are essentially window displays that encourage user interaction in return for rewards.

The interactive storefronts, which aim to engage more customers on site, allow people to touch "gold stars" to reveal Starbucks rewards. Developed by BBDO (Toronto office), Blast Radius and The Media Merchants, the new My Starbucks Rewards storefronts are fun and interactive: gold and white stars move through the animated display, allowing users to play with them to get prizes.

Offering rewards for fun interaction is definitely a way to capture more customers. Again, Starbucks proves its position at the forefront of marketing and branding. What will this mega-corp think of next?
5.9
Score
Popularity
Activity
Freshness
Get Better and Faster