58 Crazy Things to Do Before You Die 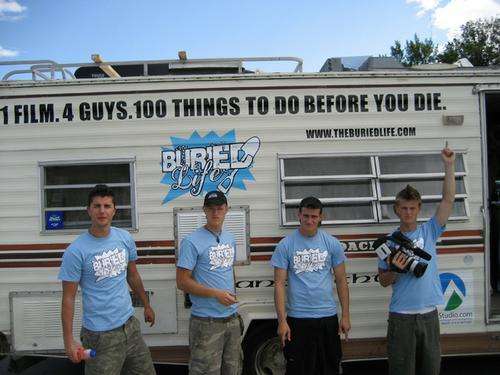 If you’re thinking it sounds similar to movie The Bucket List, you’re right, except that these young Canadians aren’t acting! In addition, they’re offering a socially conscious twist: for every item they cross off on their list, they help someone else cross something off of theirs.

Some of the things they’ve accomplished include singing the national anthem to a packed stadium, cutting a ribbon at a major opening, kissing the Stanley Cup, making the front page of the newspaper, going to Burning Man
and going down a mountain on a longboard.

A few of the things The Buried Life team has helped others do include helping someone learn to breakdance, taking deserving children on a shopping spree at ToysRUS, giving a stranger a $100 bill and helping a little girl host a lemonade stand.

The Buried Life will debut on January 18 on MTV as part of the network’s move to more socially conscious reality shows. Meanwhile, you can follow them on Twitter @theburiedlife, join their Facebook page and become a member of The Buried Life social network.
3.7
Score
Popularity
Activity
Freshness
Get Trend Hunter Dashboard

Reality Show With All Male Town
The Week the Women Went